You use your handpiece every day.  It's one of the most important pieces of equipment in the dental office, but how exactly does it work?

As you are probably aware, a typical highspeed handpiece uses air to rotate a cutting bur at about 400,000 rpm's.  These instruments are among the fastest spinning turbines in the world.

Midwest, Star, KaVo, NSK and Lares own more than 90% of the US handpiece market although there are over 100 different makes and models available from various manufacturers throughout the world.  Nonetheless, all of these manufacturers use the same basic design. 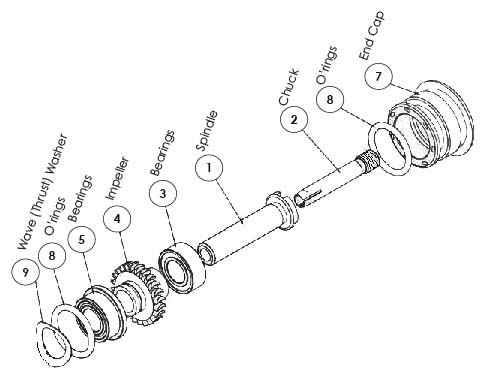 At the center of the turbine is the spindle (#1 in the diagram above), this is the shaft that spins.  Inside the spindle is the chuck (#2 in the diagram above), this is a hollow tube that holds the bur, which of course does the cutting.  As you can see in the diagram, the chuck has little slits at the end.  These slits allow the chuck to compress as it moves forward inside the spindle to grip the bur.  On standard chuck handpieces (like that shown above) the chuck is threaded (as is the inside of the spindle) and a bur wrench is used to rotate the chuck screwing it farther into the spindle and compressing the end.  For autochuck handpieces (e.g. push button) the chuck is not threaded, but rather spring loaded and includes a mechanism that allows manipulation of the chuck forward or back to open and close the end to grip (or release) the bur.

Placed on the middle (from front to back) of the spindle (it’s actually pressed in place) is the impeller (#4) this is what catches the air causing the turbine to spin.

The spindle and impeller are fairly simple solid pieces of metal (usually stainless steel or aluminum) and thus, rarely fail.  Chucks will occasionally fail as they can fracture where the slits are, but this is still relatively uncommon.

On either side of the impeller are bearings (#’s 3 & 5 above). But aren’t those solid cylinders in the diagram?  Bearings are little metal balls, aren’t they? Well, yes and no.  Technically, what we have are bearing assemblies; these are what allow the turbine to spin (by reducing friction).  The following diagram is a cross-section of a typical bearing assembly:

As you can see, the bearing assembly, or “bearing” as referred to in the handpiece world, consists of several components (including the balls you expect).  At the heart of the assembly are the actual ball bearings.  These can be stainless steel, although most high-end manufacturers (including us) use ceramic bearings.  The bearings ride around an inner ring (as it’s labeled in the diagram) called the inner race.  There is a slight groove (raceway) on the outside of this ring that the ball bearings roll in.  The inner race is generally the strongest part of the bearing assembly as it is what is pressed onto the spindle.

There is then a cage that holds the balls at equidistant intervals around the inner race.  This keeps the turbine balanced.  Think of an old washing machine with the clothes all on one side.  The “clunk clunk” of the washer is caused by the erratic rotation due to improper weight distribution.  The cage keeps the turbine spinning smoothly as it maintains an evenly distributed load (more on load later).

Bearing cages can be made of a variety of materials, generally, they are a polymer (i.e. plastic) and are usually the most fragile component of the entire turbine.  The plastics used are very resistant to heat and have very low-friction as they directly contact the actual bearings.

Outside of the cage is the outer race.  Just as with the inner race, there is a groove in which the bearings ride. The outer race rests on o-rings (the two #8’s in the turbine diagram) which in turn rest against the inside of the handpiece head.

The entire bearing assembly is then closed off with a shield (as shown in the diagram).  The shield is designed to keep debris from entering the cage and getting onto the bearings.  Naturally, if debris gets onto the bearings it can throw the entire turbine out of balance, putting stress on the cage which then fails allowing the bearings to “clump” and causing the turbine to spin erratically (and eventually stop spinning completely).

There are two more components to the turbine above, first of these is #9 a wave (thrust) washer– sometimes called a loading spring.  The Quiet Air turbine diagram shown above is one of the only standard chuck turbines to use a washer.  Washers are normally only used on autochuck handpieces to provide lateral tension, keeping the turbine pressed against the end cap to facilitate actuating the chuck.  The washer above is bent to provide additional tension, sometimes the washers used are flat and simply serve as spacers.

#7 in the diagram is the end cap (or back cap).  Technically, this is not part of the turbine.  The end cap simply threads onto the back of the handpiece head to hold the turbine in.  The end cap will also include the button (or lever) that is used to activate the chuck on autochuck turbines.  The back bearing will usually seat into the end cap of the turbine.  As mentioned previously it is extremely common for components of worn turbines or bearings to get stuck in the end cap, so always inspect the end cap thoroughly when replacing a turbine.  Also, many end caps (like the Quiet Air shown) have a groove into which one of the o-rings will seat.  Always replace this o-ring when installing a new turbine.  You will probably need to use an explorer to remove the old o-ring.

As you can see, turbines are fairly complex assemblies, particularly the bearings.

Now that we know how a turbine is made – what does this mean to you?

With the insight we have into design, now we can look at what causes failure.

As already discussed, generally it is the bearings (specifically the bearing cage) that will fail first in a typical turbine.  What causes bearing failures are as follows (in order of frequency/likelihood):

Naturally, cutting with the side of a bur is an everyday occurrence and should not damage your turbine or bearings.  The key is that you allow the bur to cut.  If you find yourself leaning into the bur, putting a lot of pressure on the side of the bur (say 5-10 pounds or so) this is creating side load.  If you press on the end of the bur, the opposite end (which is in your turbine) will be pressed in the opposite direction (like a lever).  This pushes on the inner race of the bearing compressing one side of the bearing assembly creating localized increased friction, which leads to imbalanced rotation which stresses the cage ultimately causing fracture and failure.  Remember your Newtonian physics: for every action there is an equal and opposite reaction- the more you press on your bur, the more you press on your bearings.

Ideally, you need to allow the bur to cut and simply follow the bur as it does so.  Do not press on the bur at all.  The reality is that some pressure is required, but try to keep it fairly light to avoid stressing your bearings.  Of course, worn or dull burs won’t cut as well, so they are more prone to induce side load.  When side-cutting, always try to use a sharp and fresh bur or diamond.

The good news is that excessive side load will not necessarily lead to immediate bearing failure.  Occasional pressure is expected and should not have a dramatic effect on turbine life.  However, constant or frequent pressure certainly will.  For some, saving a minute on a crown prep is worth the cost of more frequent turbine replacements, this is something you need to decide for yourself.

Using a bur that is bent or that is not fully seated into the turbine can also cause excessive side load.  Naturally, a bent bur will not maintain concentricity and will wobble, stressing the bearings.

Using a bur that isn’t fully seated can cause side load as the weight at the front of the turbine is less than that at the back.  This will not have as much of an impact on balance, but can still stress the front bearing (as it is normally doing most of the “work”).  On standard chuck handpieces, this can also cause the chuck to fracture.

Excessive temperature should be self-explanatory.  All dental handpieces are made to be heat sterilized in accordance with the CDC.  They should be sterilized at a maximum of 275° F (135° C).  Dry heat sterilizers operate at much higher temperatures and should never be used on handpieces.  You should check your sterilizer regularly for overheating with a lag thermometer.  Generally, if your sterilizer is overheating, you will probably have damage to other items in the office, but it is not unusual to notice it in your handpieces first.

Most manufacturers recommend running their handpieces at 35-40 psi (for highspeeds).  Generally, anything in excess of 45 psi will cause damage to the bearings.  Always check with the manufacturer for their recommendations, of course and try to stay within 5 psi.  Some practitioners like to use air pressure over 50 PSI to achieve better cutting power.  Remember, these bearings are very, very small and their components (especially the cage) are fragile.  While the cage may not fail right away, you will experience premature failures, shortening the excepted life of the cartridge if you use higher air pressure than recommended.  As with side loads, everyone must decide the value of increased speed vs. shortened turbine life for their method of practicing.  While higher pressure will normally result in higher rpm’s, it will also usually result in shorter bearing (turbine) life.

Last of all, debris buildup inside of the bearings can cause premature failures.  Debris will accumulate on the bearings causing the turbine to become imbalanced, stressing the cage and other bearing components leading to failure.  The shield helps protect the bearings but debris can still accumulate on the outside of the turbine and imbalance it as well.  Regular and proper maintenance is crucial to handpiece performance and longevity.

Turbines are assembled under very tight tolerances all of which are to assure concentricity is maintained.  All of the causes of failure will negatively impact concentricity in one way or another.  Once again, the bearing components are very small and actually fairly delicate, particularly when you consider the speed of 400,000 rpm (or more). It doesn’t take much stress before they can be damaged.

Never run cold water over handpieces to achieve rapid cool downs after sterilization.  Rapid cool downs could cause warping of handpiece components and you could also introduce contaminants onto your sterilized instruments.

You should never run your handpieces without burs.  Doing so could cause damage to the spindle/chuck assemblies.